The Future Of Transportation - Motorized Bicycles

Possibly the future of a rather  limited sort of transportation anyway.

Back story: I was soliciting for a bicycle to be used as a parts donor for a different project and I got a Mongoose (Wal Mart) 26" metrosexual off road bike. Turned out to be unsuitable for the original project, but it cleaned up enough to be rideable. Also some 2 winters ago my old snow blower fell apart and I replaced it. Being me, I removed the motor which still ran well, before tossing the rest.

In my second retirement I got bored and got looking at the junk lying about and voila! instant project.

When I was in Saigon, the commonest form of motor transport was a cruiser frame bicycle with a small 2-stroke motor mounted to the handlebars. When a large lever was pushed forward, the crankshaft was pressed against the front tire, and the motor pulled the bike along at 15-20 mph. The motor assembly was from Solex, famous maker of French carburettors. The exhaust pipes were quite long and extended almost to the pavement so as to keep ones clothing from getting a layer of oil on it.

Kits like this would be illegal in the U.S. with the 2-stroke motor, but there are similar kits that mount to the rear wheel and use 4-srtoke motors available at what I think of as exorbitant prices. My old blower was a 2-stroke, but I have access to specially blended oils that burn very clean.

2 nights work, and I've got the motor mounted: 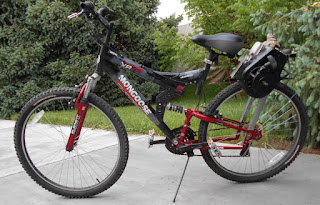 It hangs on a large bolt and swings to the rear to engage the tire. I will probably also want to change the tires to something smoother downstream as the engagement on that knobby is shall we say, a bit rough. 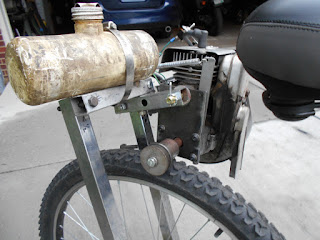 I need to make a bracket for the fuel tank and install a throttle cable. The bike is fully suspended which made the mounting bracket a bit tricky. I may need to add some extra braces but so far the thing seems pretty sturdy. 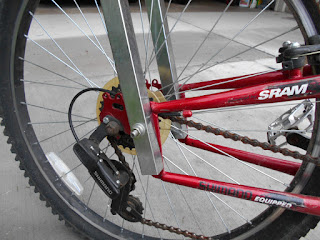 There is a second bolt at the bottom of each upright that does not go all the way through. It's barely visible on the far side.

This post qualifies as a Mad Science post which is a happy change from bitching about politics in an election year. I need one of these like a hole in the head, but as I mentioned earlier: boredom.

I built one like this before that went about 25-30 mph. Legally this is a mo-ped and as such should not exceed 35 mph. As long as you don't get caught out on the freeway, the cops don't care much. One must keep in mind however that it still has bicycle brakes.

You can drive these on the bike paths as well but you're supposed to stay below 15 mph there. In any case the bicyclists are pretty territorial.