Let me see if I've got this one right here. The Adams hierarchy of persuasion goes like this:
1. Identity (best)
2. Analogy (Not as good)
3. Reason ( useless)
4. Definition (capitulation)

So a Muslim shoots his way into a gay bar and kills 49 people. The MSM describes this as;

1. Identity. He did it because he was inspired to Homophobia by racist Republicans and the NRA made him buy the assault rifle. This works pretty well and is backed up by a parade of Donk senators providing a gabfest in the Senate calling for bans on guns, Republicans, and the NRA.

2. Analogy. Some people have pointed out that the shooters religion demanded that he do this. The lefties counter by calling these people Islamophobes (identity).

3. Reason. A number of people have pointed out factors like the club being a gun-free area with only one person breaking that rule and suggesting that an armed "designated driver" type or 2 or 4 might have helped. Mentioned less often was the police response time of 3 hours, and the actions of at least one of the club goers in blocking an exit door out of fear that the shooter might use it. As mentioned above; useless. How often has this information been published?

4. Definition. Mostly centered around the shooters use of a Sig, and not an AR. Even the hard core gunnies will tell you that this is a trivial difference right up there with someone making a point that you were run over and killed by the drunk driver of an Accord rather than a Camry.

So far the anti-gunners are winning on points. It seems to have occurred to some that the left values a dead gay over a live one since a dead gay is a greater victim than a live one, and not everyone in the gay community is on board with this. 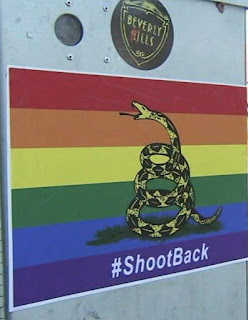 What next? Gays joining the NRA and voting Republican? Next thing you know, blacks and Hispanics will figure out the same thing.