Against all dire predictions of the chattering classes and the (obviously) better judgement of the political elites, Britain is leaving the EU: 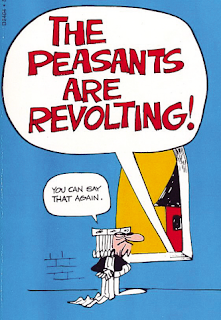 It's not hard to see a line of northern European countries looking at this and thinking "Why not us as well?". The architects of the EU envisioned a unified Europe which is a good thing, and have produced the worlds largest copy of Venezuela, complete with an invading foreign army on the South and an ambitious empire builder on the East against which they seem to be powerless.

Now comes the dicey part where the Brits, having thrown off one form of tyranny, are now free to replace it with one of their own devising. I wish them the best of luck with that. History does not encourage optimism but hey! they could get lucky. An opportunistic and economically literate U.S. President or candidate would be over there right now, trade agreements in hand lining up the deals that generate the wealth, or at least would have a qualified advisor doing this.*

Over here one could easily see the King replaced by any of several people including His Serenely Oblivious Majesty King O'Bama I, Hillary (I am not a crook!) Clinton, and any of several leaders of the GOP establishment.

Seems like a lot of us peasants are in fact Mad As Hell and Not Going To Take It Any More.