Why The Left Considers Everyone Else A Nazi

I'm thinking this stems from political nearsightedness. First consider this view of the U.S. from the POV of a Manhattenite: 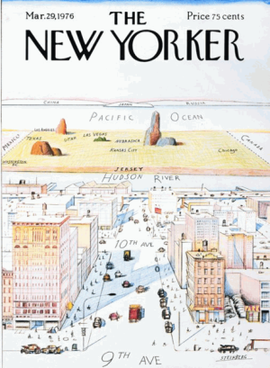 Note the uniformity of everything West of the Hudson river. There is no difference between Jersey and California. O.K. there actually isn't that much today, politically, but let's not get wrapped up in that. Socially, they see no real difference.

Now consider the political landscape. On the left end, there's the Communists, exemplified by Joe Stalin. Moving to the right we next find the Socialists exemplified by Hitler and Mussolini, followed by centrists, then conservatives. Stalin complained about "right wing Nazis/Fascists", and his followers, not being able to see beyond Hitler, concluded that there really wasn't anything of consequence to the right of Der Furher. Hence all Capitalists have become Fascists somehow, and are thus to be eliminated, the sooner the better.

Rather near-sighted of them, don't you think?