Here's the latest shot from our friends, the Chinese: 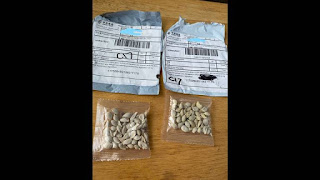 It's a Tyvek envelope containing a handful of seeds.

Clue #1: It arrives in your mail box unsolicited, from China.

Clue #2: It's labeled as jewelry. Jewelry is not subject to inspection. Agricultural products are.

These have shown up in mail boxes in Washington State, Utah, and Virginia. Got wide spread distribution. The U.S. Dept of Agriculture is asking that if you get one of these packets, that you do NOT open it. Especially do NOT plant them to see what comes up. They are probably not magic beans. Think Round Up resistant noxious weed. A leafy version of C19.

Do NOT trust China. China is A**hole! Feel free to write the U.S. Dept of Agriculture and ask them what these things are. My guess is an attack on our food supply.

Side note: Everyone likes to talk about WWIII. Listen up folks, WWIII ended Dec 26, 1991 with the final collapse of the Soviet Union. We won, they lost. We are now into WWIV which is pitting western civilization against an unlikely alliance of Islam and Chinese Communism. The Chinese are attempting to eradicate Islam in their Western provinces, and at the same time bolstering it in Iran. Eventually both sides are going to figure out that they chose their allies poorly, but until then, they have in the U.S. a common enemy.
Posted by Billll at 4:32 PM