Season change here is when Mother Nature grabs the switch from Summer to Winter and bangs it up and down several times just to keep everyone on their toes. Last night the first snow hit, projected to be 2-5 inches of heavy wet stuff that melts on contact with the streets and sticks to all the foliage. Since none of the trees here have lost any leaves yet, I'd say that the next week or two will be a busy one for the tree people or anyone with a chainsaw. The power just came back on, so here's a post.

Last weekend was the official Punkin Chunkin contest as the Delaware site remains tied up in a lawsuit. I've been helping the Jefferson County Open School with their entry, the Dead Ent Resurrection as they hoped to better last years toss of 430 feet and second place in their class. 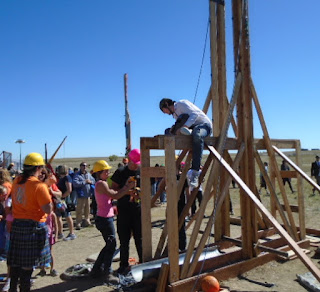 Here they are, putting some between shot repair work in. Seems the improvements put a bit more strain on the arm and some of the structure. Their practice of taking the machine apart and stacking it outdoors uncovered probably didn't help either, but they made 493 feet this year and reportedly took first place in their division, so yay us! 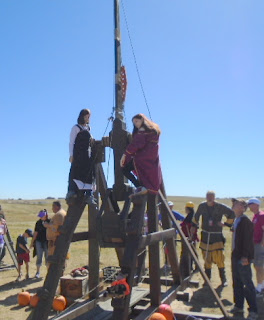 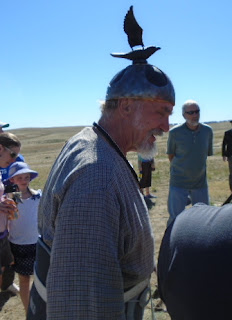 Complete with decorative young ladies and armored knights
Also there was a centrifugal machine, Inertia II, which had some issues with its release timing 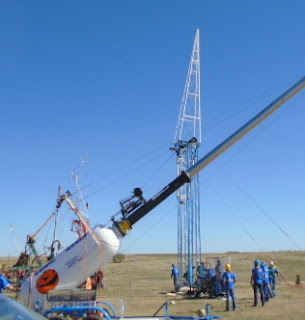 In this pic the tapered arm is spinning at a pretty good clip. the whistle of the air is impressive. Motive power is from a 454 cu in Chevy engine. In the foreground is Sonic Pumpkin, a compressed air gun. 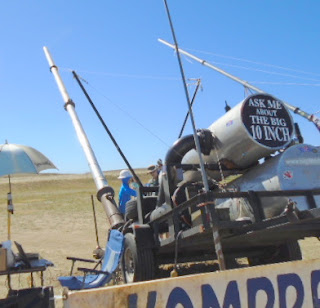 Big 10 Inch is a perennial contender. The air guns were able to consistently get out beyond 4000 feet although I did not hear of any reaching the elusive goal of 5280 ft this year. The Kamikazi is the redecorated effort of Mike B who added 22 ft of barrel to get into the 4000+ club this year. 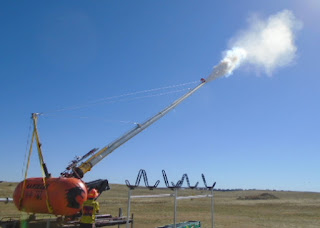 Looks like the condensate might be building up in his tank. Building these things is always a problem as most of us live in the 'burbs and no matter how friendly the neighborhood, there's always some curmudgeon complaining about artistic endeavors like these, especially if it's being done out where it can be seen. 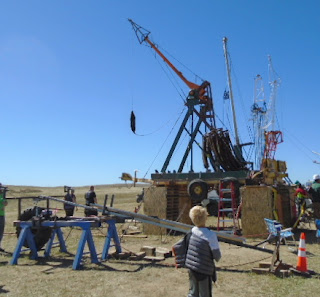 In the foreground is a linear catapult of the sort the Navy favors for launching planes. The big one behind it features a huge collection of garage door springs and is called "Not In My Driveway" which was named by the builders wife. 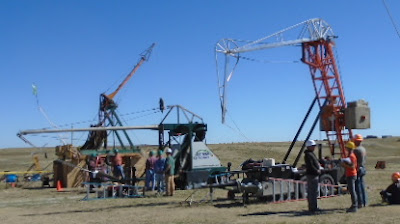 The red and white machine is called Pluto and features 2 articulated arms plus a sling. This one has broken into the 2000 ft club and was built just down the road from me. I think there's more cement in its counterweight than in my driveway.