The End Of Global Warming

Michael Mann, who produced the famous "Hockey Stick" graph showing that we would all soon be done medium well unless taxes were raised to astronomical levels to fund more studies or something has been called out on the credibility of his data. Shown below are 2 versions of global temperatures over the last 1000 years. 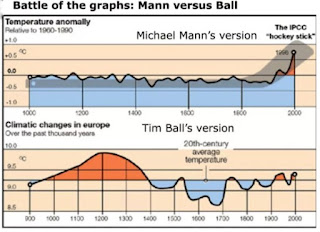 Bit of a difference, eh? Note that Manns graph omits the well documented Medieval Warm Period as well as the Little Ice Age that followed it. Dr Ball has said that the difference between the 2 graphs has to be the result of deliberate book-cooking so Dr Mann sued him for libel.

In court, in the discovery phase, Dr Bell demanded that Mann produce all his data, sources, and methodology including analytical software. The judge agreed that this was a reasonable request. Mann has refused. Next stop: Jail for contempt of court. In any case, if the work had been legit, it presumably would have stood up to peer review, but at this point we have to take Dr Mann's word for it. M4GW's video pretty much sums it up:


If the video disappears or cannot be viewed, go here to see it. Stay on and there's a bowdlerized version that was produced when the thin skinned Dr Mann demanded the original be taken down.